It is with great sadness that I must announce the passing of our Confrère, Judge Antônio A. Cançado Trindade, who died in Brasilia on 29 May 2022, following a serious illness, which he endured with great dignity.

Legal Advisor to the Ministry of Foreign Affairs of Brazil between 1985 and 1990, Executive Director of the Inter-American Institute of Human Rights (1994-1996), President of the Latin American Society of International Law (2012-2015), member of the Curatorium of the Hague Academy of International Law and many other academic institutions, Antônio was a tireless promoter of our discipline.

Elected to the Institute of International Law at the Session of Strasbourg in 1997, he became a titular member in 2001 at the Session of Vancouver. Since his election, with the exception of the Tokyo Session (2013) and last year’s Online Session due to his illness, he has actively participated in all sessions, as evidenced by his many interventions listed in our Yearbook. He held the position of First Vice-President of the Institute between 2019 and 2021. His participation in the work of the commissions was also remarkable. He was a member of the following Commissions:

–       Are there Limits to the Dynamic Interpretation of the Constitution and Statutes of International Organizations by the Internal Organs of such Organizations (with Particular Reference to the UN System)?;

Author of 78 books and around 800 articles and contributions to collective works, of great intellectual rigor, these works are his legacy in very diverse fields, ranging from general international law to human rights, the law of international organizations, the settlement of disputes and many others. The title of his general course at the Hague Academy of International Law serves well to sum up the meaning of his work: “International Law for Humankind: Towards a New Jus Gentium”.

Possessing a vast culture and fluency in several languages, he has had a profound impact on international law through his vision based on humanity, the dignity of the human person, and justice. His example will be a source of inspiration to present and future generations of international law. His jovial and warm spirit, his passion for all he did and defended will be greatly missed. We send our condolences to his wife Carmelita and his children, to his colleagues at Court and to his many friends within our Institute and elsewhere. 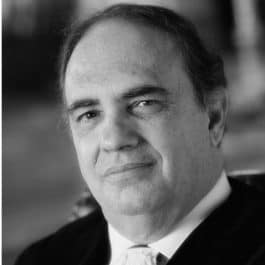 Register to the newsletter